J.C. Tabler
Louisville, Kentucky, United States
J.C. Tabler was raised by a pack of feral lawyers. After being ejected from their pack, he sought employment loading sacks of manure. Since then he has been, at different times, a bouncer, a bartender, a sales clerk, a legal assistant, and a steamboat deckhand. He lives in Louisville, Kentucky, is married, and is hard at work on other stories when time permits.

Other Writers (Go ahead, abandon me)

Stuff To Waste Time By

Well, I promised a ghostly encounter from our trip to PA, and here we go.

My wife's family lives about 15-20 minutes away from Jim Thorpe, PA. This used to be known as Mauck Chunk, and was a location of miner's labor movements in the 1870's, most well known among them being the Molly Maguires. The Mollies were miners, Irish descent, who rebeled against the company and their foremen due to the unsafe working conditions, deadly job status, and low pay. Ire raised by being treated more like dogs than men, they began to meet and organize with deadly results.

These men were pinpointed as the murderers and conspirators behind the deaths of mine foremen, and after being penetrated by a Pinkerton were convicted and sentenced to be hung. Four of these men were held in the Carbon County Jail, a structure that at the time was recent, but torturous as many small American jails were during that time. Innocence was protested, and even today there remains a debate about the actual guilt of the Molly Maguires, but it didn't stop them from being hung. Among these, and the most notable for folklore, was Alexander Campbell, who purportedly placed his hand against his jail wall, stating an innocent man was being hung and his mark would remain there forever as a stain on the record of the county, state, and country for their grave injustice. The handprint, accoridng to legend, remains.

I recently began working on a few stories using an Irish Immigrant sort of background, sci-fi stuff, nothing scary or hard. However, the Molly Maguires serve a huge role in one of the three stories, and I decided to visit Jim Thorpe to get a feel for the place while I was up there. Unfortunately the jail itself was closed to tours that day, so I had to satisfy myself taking pictures. After a few good shots of jail, which really primed the pump inspiration wise, we clambered back in the car to head downhill. Turning around in a gravel lot beside the jail, where a stone wall that was obviously once part of some structure stood, our car died. The brand new car.

The funny thing is, our van never "dies". Even when the engine is off, the radio continues to play for three-four minutes. This time it went dead, as did all the electrical. Luckily, gravity was on my side as we were headed down a steep hill, and through muscle (power-steering was a no go) while riding our brake I made it to an alley, and turned the key. Van started right up...

Big things on this, because I'm never comfortable saying I met a ghost and it played auto mechanic on my car. The van was checked out, completely, before we left with no problems in the electrical system or under the hood being found. It started with no problem, and went to a mechanic upon our return, once more with no problems to explain the sudden stop. Still, it was a steep hill, and this van was used to the relative flatlands of northern Kentucky. Could be a fluke, right?

Then my wife showed me a couple pictures from the jail, pointing out something she found. Could just be a glare, but you be the judge, eh? 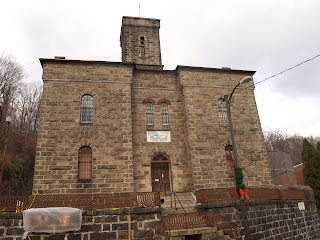 Don't see it? Here's a more close-up version. Look at the second column of bars, about four up from the bottom... 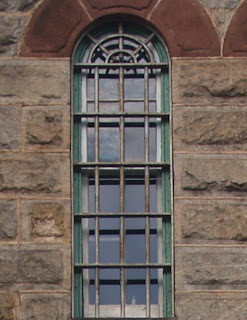 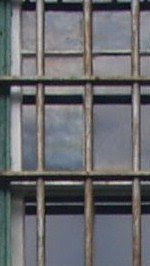 Is it just me, or is anyone else making out a face?

Creepy. I definitely see the face in the middle picture.

The bottom two are the same picture magnified. The top one isn't the same, I uploaded the wrong shot of the front of the jail...but the last two are both magnified from one single shot of the jail's front.

I am a believer in ghosts myself, I would write lousy ghost stories if I didn't believe at least a little.

Nice story. And man oh man, if you ever choose to do so, I could swap ghost stories with you all day. My room mate in college had parents that lived in a house in New Kent, VA, right where 2 historic battles of the Civil War were fought. I visited there 4 times. Each time, some very weird stuff happened. Because of his house (and my own encounter several years ago) I am a firm believer in ghosts.

Not that you asked...

Spooky stuff. Something odd in the pic. And the van? Who can explain that?

I see something, all right. The more you say about this story you're on, the more interesting it gets. I'm from the very north of WV/western PA area (Pittsburgh and Wheeling are about equally distant from my hometown), so that's all something with which I was raised-- my Nano book used some of the lore left over from the Matewan Massacre.

So much weird energy created in those times. Not hard to believe that if there are ghosts, they'd be tied to places like that, is it?